The number of universities increased by one to 127 and that of vocational colleges by 12 to 780 in the past year.

In the 2015-2016 academic year Kazakhstan had 127 higher educational establishments, of which five were national universities, 19 institutions, 20 academies and 83 universities.

Almost two-thirds of Kazakh universities, or 77 establishments, were owned privately and a further 50 were state-owned. The country also had five branches of foreign higher educational establishments.

Admissions to higher educational establishments in 2016

Out of the total number of grants, 3,162 were allocated for the Magilik Yel Zhastary – Industriyaga! (“Youth of Eternal Country for Industry!”) programme (Serpin-2050) (“Breakthrough-2050”), including 1,000 grants for teaching, 1,717 for technical, 345 for agricultural and 100 for medical specialisations.

Grants were distributed as follows: 5,000 for teaching specialisations, 700 for humanities, 100 for law, 170 for arts, 700 for social sciences, 1,570 for natural sciences, 12,593 for technical sciences and technology, 60 for defence and security, 3,000 for medicine and 2,690 for agriculture and veterinary. A total of 7,429 grants were allocated for master’s programmes, including 3,000 for specialised masters, and 628 grants were allotted for PhD programmes, including 43 for Nazarbayev University.

Regionally, almost half of all universities are based in the capitals – 42 in Almaty and 14 in Astana. Densely-populated South Kazakhstan Region has the next highest number of universities – 11.

Events: The Education and Science Ministry notes that this year’s school-leavers who failed to win a student grant are eligible to apply for the State Programme for Guaranteeing Student Loans and obtain loans guaranteed by the Finance Centre joint-stock company of the Education and Science Ministry at an annual rate of 10% and above for a duration of 12 years if they have financial difficulties to cover tuition.

Student loans guaranteed by the Finance Centre could be obtained by both school-leavers and existing students of all universities and vocational colleges of Kazakhstan, be it full-time, part-time or distance learning students.

The Finance Centre was set up by a government resolution No 541 issued on 1 June 2005 via the restructuring of the ministry’s Finance Centre state establishment. The centre aims to issue guarantees on student loans offered by financial organisations and ensure the repayment of student loans. 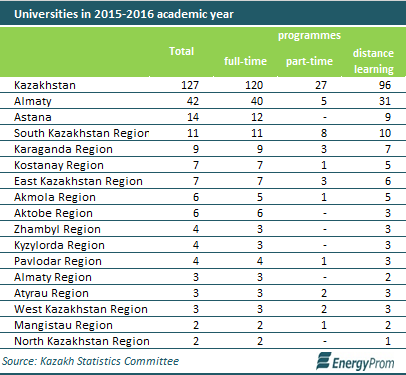 The sector of vocational colleges is made up by 780 colleges, including 327 privately-owned and 453 state-owned. There are also 18 branches of educational establishments.

Slightly over 20% of colleges (160) are based in rural areas and the remaining 620 are in urban centres.

The sharp increase in the number of vocational colleges was observed in the 2013-2014 academic year thanks to changes in legislation. Under the Kazakh law on education, professional lyceums were transformed into colleges that year. The number of college students and teaching staff grew as well to 499,000 and 37,500 people respectively in the 2015-2016 academic year.

Events: The president has declared the launch of the Free Vocational Technical Education for All project in 2017. According to the president, the government will provide Kazakh citizens with primary specialistions.

The vocational education system trains specialists at three levels at the moment: qualified workers of basic and higher levels and specialists of middle level. 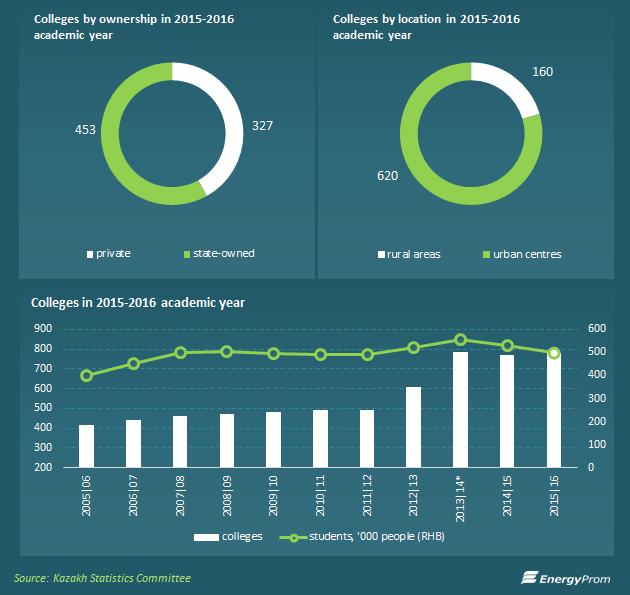 Events: On 22 June 2016 the Education and Science Ministry’s Finance Centre registered the 15,000th participant in the state educational deposit system, a state programme to support the population to obtain fee-paying vocational, higher and graduate (master’s) degrees. This programme offers each Kazakh citizens a chance to save funds for their or their children’s education in Kazakhstan or abroad.

Deposits of the system have a high yield (up to 22.2%). In addition to the interest rate paid by commercial banks at 14% a year (annual effective rate of 15.2%), the government pays additional 5-7% on educational deposits, which is the main distinction of these deposits from other types of deposits. Deposit-holders from among socially-vulnerable population groups receive the highest rate of government bonus at 7% (these are orphans, disabled and children of low-income families and families with many children). Other deposit holders are paid additional 5% on the entire amount of a deposit that does not exceed KZT212,100 at the moment.

The analysis uses official statements by the Kazakh Education and Science Ministry posted on edu.gov.kz