Kazakhstan reduces oil and gas condensate output by 4.4% to 32.4m tonnes in January-May 2016 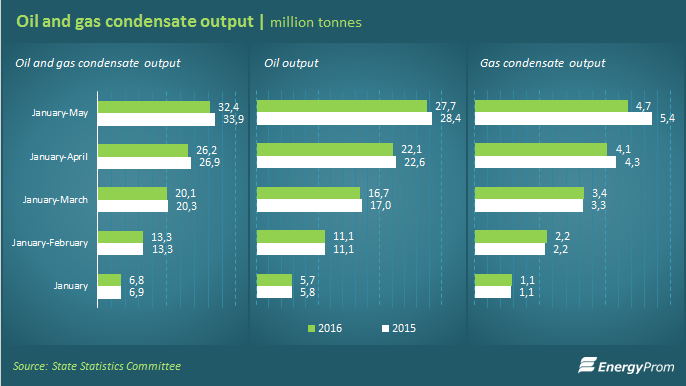 Oil and gas condensate output fell to a certain extent in all oil-producing regions, except for Atyrau and Zhambyl Regions. In this context the reduction in oil output was remarkable in Kyzylorda and West Kazakhstan Regions – by 508,500 and 717,400 tonnes respectively, while Atyrau Region increased oil output by 194,200 tonnes. The downward trend was a result of fall in the flow rate in old fields as the profitability of commercial production decreased in some of the fields and cuts in oil companies’ investment programmes. Kazakhstan is pinning great hopes for sustainable recovery in oil and gas production on the relaunch of commercial production on the North Caspian project (in the Kashagan field) which is expected in the fourth quarter of 2016.