Kazakhstan’s industrial output goes down by 2.2% year on year in Jan-Apr 2016

In money terms industrial output totalled KZT6,941.8bn in Kazakhstan in the first five months, with the physical volume of industrial production down by 2.2% year on year.

This trend was largely caused by a fall in output in certain raw materials, unfavourable domestic demand and poor conditions for exports due to a collapse in prices on raw materials markets and recession in the Russian economy. Hopes for a weak tenge supporting industrial production and strengthening external demand from foreign consumers dwindled, affecting domestic demand. Nevertheless, the depreciation of the national currency had a positive impact on financial indicators of oil and gas and other export-based industries. 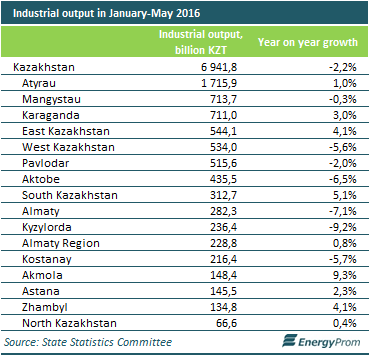 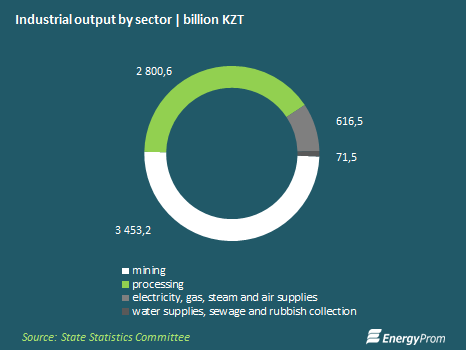 The processing sector posted an insignificant growth in industrial output – 0.5% per year, above all, in the metals industry which increased output by 8% and the rubber and plastics industry by 7.3%. Sluggish investment demand led to a considerable contraction in the machine-building sector by 28.1% year on year.

However, certain improvements in the processing industries did not bring industry as a whole to a positive trend as the extractive sectors contracted. Raw material extracting enterprises reduced output by 4.3% on average from the same period of 2015. For example, iron output fell by 23.1% and coal and lignite by 10.5%. The output of Kazakh key export item – crude oil and condensate – continued a downward trend, falling by 4.4% year on year to 32.38m tonnes.

Industrial output showed significant growth in Akmola and South Kazakhstan Region – by 9.3% and 5.1%, respectively. The sharpest fall was in Kostanay Region (15.7%) and Kyzylorda Region (9.2%). Atyrau remained the unconditional leader in terms of industrial output in money terms.