Output of unrefined and semi-refined gold increased by 21.5% year on year, that of refined gold by 16.5%

Jewellery prices jump by 20.1% year on year on average in Kazakhstan, by 50% in Astana.

Kazakhstan produced 40.7 tonnes of unrefined and semi-refined gold or gold in powder in January-July. This is 21.5% more than in the same period of last year, when output was increased by 29.6% year on year.

Events: According to a half-year statement by Polymetal International PLC, changes in macroeconomics and the financial market in the first half of 2016 created favourable conditions for gold. 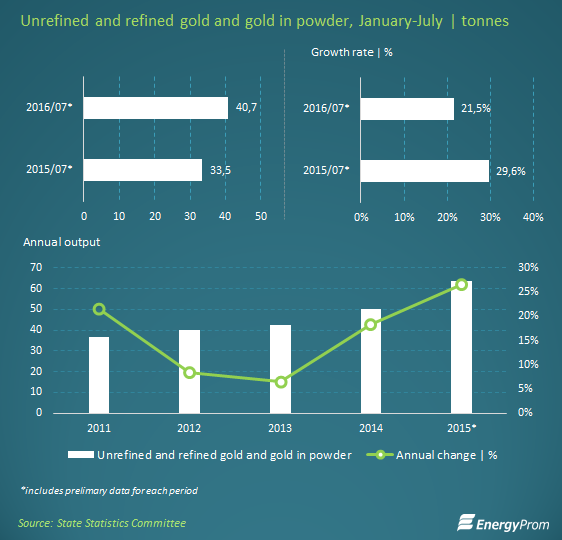 Events: on 1 August 2016, after obtaining all necessary permissions from the regulators, Polymetal completed the acquisition of Orion Minerals LLP, which owns a licence to develop the Komarovskoye gold field in Kazakhstan, from Kazzinc, a subsidiary of Glencore PLC. The deal cost $100m. In addition, Kazzinc will receive a deterred payment which will depend on future output at Komarovskoye and gold prices. The deterred payment, which will not exceed $80m, will be calculated quarterly and paid at the price of gold above $1,250 per ounce.

Polymetal has been working in Kazakhstan for a long time. In 2009 the company acquired its first asset – the Varvarinskoye field (with reserves of 1.5m ounces) where production was launched in 2007. In 2014 it acquired the giant Kyzyl project, which includes the Bakyrchik and Bolshevik gold mines with combined reserves of 7.3m ounces where large-scale construction has already been launched. The work focuses on external infrastructure and digging to prepare the sites for building refining facilities and auxiliary buildings. The construction is underway in line with schedule; the first batch of concentrate is expected to be produced in the third quarter of 2018. 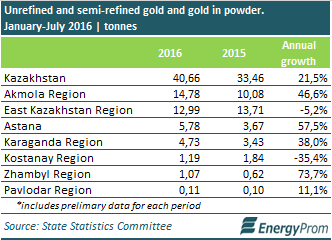 The retail price of jewellery items increased by 20.1% year on year to KZT13,500 per gram in Kazakhstan at the end of July.

The highest price and fastest annual growth among Kazakh towns and cities were recorded in Astana – KZT18,800 per gram, a 50% growth year on year. 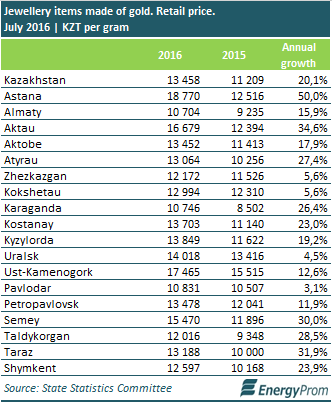