Clean energy generation jumps by 130% year-on-year in this period.

The installed capacity of renewable energy facilities, excluding major hydropower stations, reached 251.55 MW in Kazakhstan in 1Q2016. This is 74 MW or 40% more than in the same period of 2015. The main boost came from solar and wind farms with installed capacity increasing by 52.16 MW and 17.49 MW, respectively, in the past year. Notably, according to the Kazakh Energy Ministry, 14 renewable energy facilities with a total capacity of 119.9 MW were built in 2015, the largest of which are the 50MW Burnoye solar station in Zhambyl Region and the 45MW Yereymentau wind farm in Akmola Region.
At the same time, total clean energy generation stood at 186.9m kWh in the country in January-March 2016 against 82.3m kWh in 1Q2015. Small hydropower stations and wind farms accounted for the bulk – 117.63m kWh and 59.76m kWh, respectively. Power generation from renewable sources totalled 704m kWh in Kazakhstan in 2015, a 22% increase on the previous year. However, the share of renewables in total power generation was 0.8% in Kazakhstan last year. 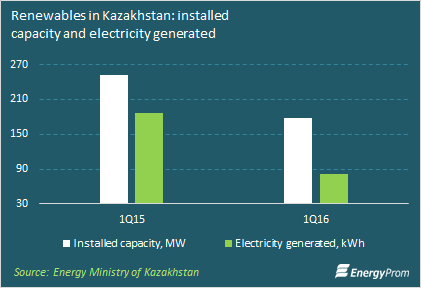 For comparison, according to Bloomberg New Energy Finance’s calculations, the global capacity of renewable energy increased by 9%, or 147 GW, to 1,849 GW in 2015, including wind power added 63 GW (to total 433 GM), solar photovoltaics 50 GW (227 GW) and hydropower added 28 GW (1,064 GW). Globally, in 2015 for the first tie renewable energy outperformed “traditional” energy based on fossil fuels in terms of new capacity commissioned, with annual investment in renewables exceeding $200bn since 2010. 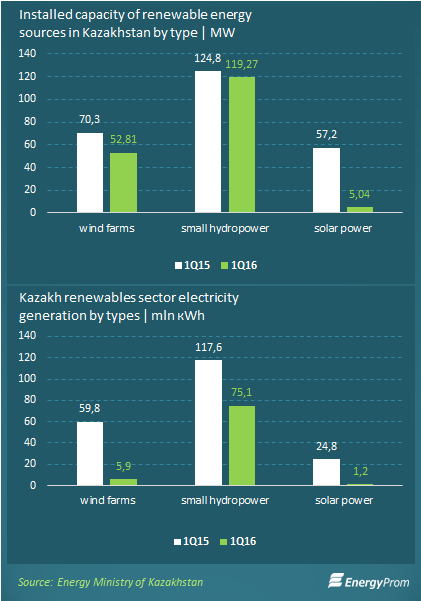