Who and why does Kazakhstan's saiga antelope give trouble?

Experts question the department's statistics, as well as decisions made at state level regarding saigas

In early summer, there was renewed talk of a decent increase in saiga numbers. Some were happy about the revival of the stock, while others were worried about the crops. There were those who were preparing for a "harvest": a draft order of the Ministry of Ecology, Geology and Natural Resources of Kazakhstan was urgently published to allow the collection of derivatives, i. e. horns from dead saigas. Public reaction was so negative and explosive that the Ministry urgently withdrew the draft. Everyone understood that the introduction of the order meant in fact a covert legalization of illegal horn harvesting, but not the systematic and controlled disposal of saiga that had died naturally or because of natural factors such as drought. This has once again demonstrated that the state authorities are not prepared for the rapid growth of the saiga population

However, the competent ministry has not taken any real steps to develop a coherent, scientifically justified strategy regarding the future prospects and growth of the saiga population. Even the causes of the mass saiga mortality in Betpak-Dala in 2015 have not been thoroughly investigated and communicated to the general public.

In principle, no full-scale studies on saigas have been conducted in Kazakhstan in the post-Soviet period. In fact, sector specialists have no specific independent studies, only aerial survey data. At the same time, the aerial survey is carried out with funds allocated by the authorized state body and does not involve a wide range of independent experts. The methodological quality of aerial accounting also raises big questions. In this situation, independent experts and specialists in hunting sector, in particular, specialists of the Republican Association of Public Associations of Hunters and Hunting Entities "Kansonar", cast great doubt on the data on such a rapid increase of saiga population. Recently, the thesis of saigas harming agriculture has been frequently used. Meanwhile, as recently as last year, Alexei Grachev, head of the Laboratory of Teriology at the Institute of Zoology of the Ministry of Education and Science of Kazakhstan, stated that there was no particular competition between saigas and domestic animals. Sources from the Soviet period, when a comprehensive and consistent study of saiga behaviour was actually conducted, also confirm that the harm caused by saiga migration is not so critical for agricultural development.

However, such harm and conflict can indeed be present – if created artificially. For example, if the territories of traditional saiga migration routes have been illegally seized under conditions of such lack of control by the authorised agency. All this is especially unpleasant taking into account that the people concerned are clearly waiting for the actual "legalization" of poaching, and the urgency of the revocation of the order of the Ministry of Ecology of Kazakhstan on the possibility of collecting saiga derivatives suggests that the situation is not under control, or some kind of foul play is taking place.

Regarding the saiga population increase, experts of the Association "Kansonar" questioned and decided to re-examine the correctness of the data on the Ural population growth of 38.3-fold over a decade, with an average annual growth rate of 44.6%.

The initial population size was assumed to correspond to the number of saigas in the Ural population in 2012. A simulation with the specified parameters, maintained for 10 years, showed that the population at the end of the tenth year would be 385-390 thousand heads, with an average annual growth rate of 34%. It is noteworthy, that the Ministry's data on 801 thousand heads exceeds this calculated figure not by 10%-20%, but at once more than twice.

Let us make it clear: the level of growth to almost 400 thousand from 20 thousand in 2012 was predicted by experts in the conditions of the model, where there are no adverse climatic and other factors for 10 years. In addition, this model assumed the most favourable baseline parameters. It is known from special literature of the Soviet period that maximum increases were observed only after critical situations, when the herd was reduced by 40%-50%. In subsequent years, due to the factors studied, primarily due to characteristic changes in the sex and age structure of the flock and congenital polygamy, the flock recovered in numbers during 1-2 seasons. But later the annual growth rate always decreased unambiguously to 30%-35%. If we take data on saiga population dynamics during Soviet times, we find that the maximum one-time annual growth rate was 38%-42%. Back in 2014, Canadian expert Kent Jingfors Kent, in his paper "Sustainable wildlife management in Kazakhstan: opportunities and threats", as part of a joint project of the Committee on Forestry and Wildlife and the UN Development Programme, was very sceptical and somewhat sarcastic about the saiga population dynamics claimed by the state agency: "The increase in saiga numbers with an annual increase of 37% from 2013 to 2014 is particularly remarkable. And it is not entirely clear what has caused this increase - improved monitoring technology (e. g. covering large areas of saiga range), or the extraordinary ability of the population to recover and the absence of natural mortality. [...] the huge increase in the saiga population (37% in 2 years) raises questions about the accuracy of census methods.

Regarding the relevance of current census methods to current realities, the Saiga Conservation Alliance's "Summary Report on Conservation Status and Implementation of the Memorandum of Understanding" for the Secretariat of the UN Convention on the Conservation of Migratory Species states: "Vast distribution areas, significant differences between seasonal ranges, nomadic lifestyle and natural fluctuations in population size make accurate population estimates extremely difficult and reduce clarity of population trends. Surveys using appropriate methods (aerial surveys within a defined band in Kazakhstan, ground surveys using remote sensing sampling in Mongolia) can make counts more accurate and reduce (but not eliminate) bias.

"The 'Medium-term International Work Programme for Saiga, 2021-2025' adopted by the 4th Memorandum of Understanding on Conservation, Restoration and Sustainable Use of Saiga Antelope, held in September 2021, calls for a series of urgent (1-2 years) and critical actions to improve saiga numbers: "Conduct studies on saiga movement and migration using appropriate technology (including satellite tracking and remote sensing), with a particular focus on the use of satellite-based techniques".

Kazakhstan has its own understanding of "appropriate technology" ([1],[2]), which we do not even dare to comment on.

The quality of migratory and rookery tracking in these conditions is beyond question. There are also ground services available, but considering the area, the list of species to be protected, the number of staff and the equipment available, there are reasonable doubts about the quality of monitoring on their side. 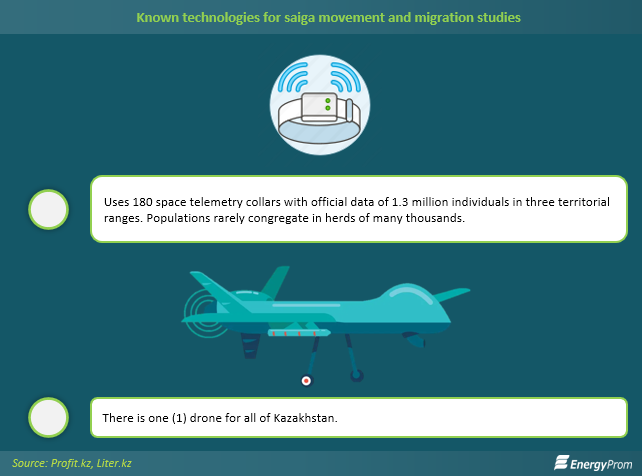 However, it appears that the competent authorities are not concerned about the quality of monitoring at all. For example, on 2 June 2022 the Ministry of Ecology, Geology and Natural Resources of Kazakhstan published for discussion a draft order "Regulations for the marking (tagging) of saiga horns in order to control their trade in the domestic and foreign markets", and on 10 June another draft order was published, this time to add saiga to the list of animals whose numbers are subject to regulation in order to protect public health, protect agricultural and other domestic animals from disease, etc., within the framework of the law.

Thus, by publicly withdrawing the draft order on the possibility of collecting derivatives, the ministry is trying to legalize the destruction of saiga by roundabout means. Draft orders have already been prepared on the norms of taking 40,000 individuals without a breakdown into populations and sex and age groups. These decrees stipulate that some unknown, to the public, specialized organization will carry out hunting, and some unknown organization, again, with the right of state monopoly will sell derivatives, first of all saiga horns.

The officials of the Ministry forget that in case of realizing their plans on the so-called regulation of the population, they will do irreparable harm to Kazakhstan, as a signatory of many international agreements on endangered animal species.

Expert calculations presented in the article, which contradict to the figures declared by the relevant agency, dubiousness of the official data, considering inadequate growth of the figures since 2012, as well as the Ministry's attempts to amend the legislation at any cost raise reasonable questions and concerns of the Kazakh society.

Instead of these controversial steps, in order to conserve and protect the saiga population, a proper livestock census, involving international experts and the public, should first be organized. It is worth creating an organization with 100% state participation, which will be accountable to society and which will engage in scientific substantiation of the limits of saiga population control. Such an organization should oversee the whole range of activities in the sector, and be directly involved in saiga culling, collection and accounting of carcasses and derivatives (horns), utilization and processing of saiga meat, hides and horns.

Strict state control of the market for saiga parts and derivatives should also be established to protect against poachers, with real and sufficient means of registration, secure labelling, etc. Note: This is not only about maintaining public confidence in the Republic of Kazakhstan, but also about the specific recommendations of international experts that were given to Kazakhstan during the meeting of the signatories of the 'Memorandum of Understanding concerning Conservation, Restoration and Sustainable Use of the Saiga Antelope', held in September 2021.

The government and responsible authorities should bear in mind that failure to comply with international agreements on biodiversity protection threatens Kazakhstan with being blacklisted as a non-compliant state, ignoring the recommendations of international environmental organizations, which will result in financial penalties for both the state and individual officials.