Kazakhstan has been holding leading positions in Central Asia, while the country’s unconditional objective is to enter the 30 most developed economies in the world. Currently, Kazakhstan has already been implementing reforms, adopting the OECD (Organization for Economic Cooperation and Development) legal instruments, best practices, and standards. The level of a country’s development is an integral indicator of economic and social development, and of the state of the environment. This totality fits into the “sustainable development” concept. The term not only means stable economic growth, but also implies such a path of economic development that does not cause irreparable harm to the environment and has a clear social orientation.

The development of the Kazakhstani economy in recent years is associated both with overcoming the crisis and with the program of reforms undertaken with due account of “The Agenda for Sustainable Development for the Period up to 2030” UN Resolution adopted in 2015, within the framework of which 17 goals in the field of sustainable development were approved.

Industrial companies, and first of all, subsoil users, within the framework of their contractual obligations also participate in resolving social and environmental problems. Business costs channeled for social development and local infrastructure are unevenly distributed across regions due to differences in investment into mining projects. For example, in Atyrau Region, two largest oil and gas projects are being implemented at Tengiz and Kashagan Fields, whereas in West Kazakhstan region, Karachaganak Field is being developed. 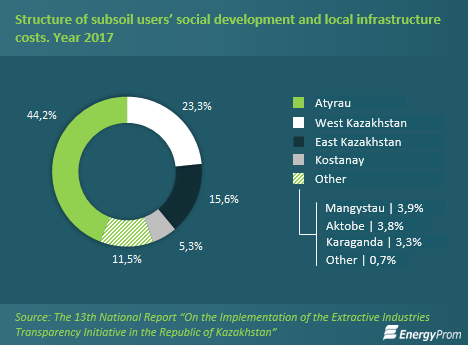 The information provided in the report on the Extractive Industries Transparency Initiative takes into account the investments of companies in the regions of production, but this data does not include investments into republican programs and other regions of the country (for example, KazMunayGas, on behalf of the Government, invested into the infrastructure of Turkestan).

The major Kazakhstani companies annually publish reports on sustainable development in the format of GRI* international set of standards Within the framework of public reporting many targets for company development have set, including standards on employee health and safety, anti-discrimination, gender equality, human rights assessment, energy and emissions reduction, waste management, and general management. 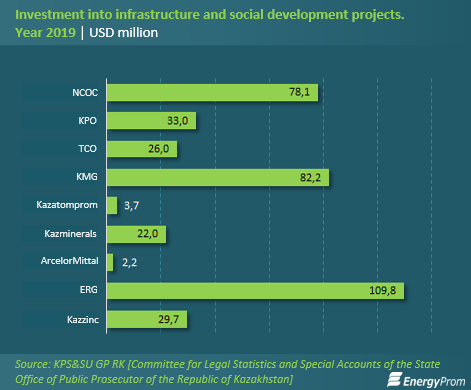 It is worth noting that the leading position in social investments in 2019 was taken not by an oil company, but by Eurasian Resources Group (ERG) with the total social investment of USD 109.8 million. Of those, 83% fell on direct investments into social infrastructure, while USD 53 million of total costs were channeled to the implementation of projects in the field of culture, infrastructure, and education across Kazakhstan. 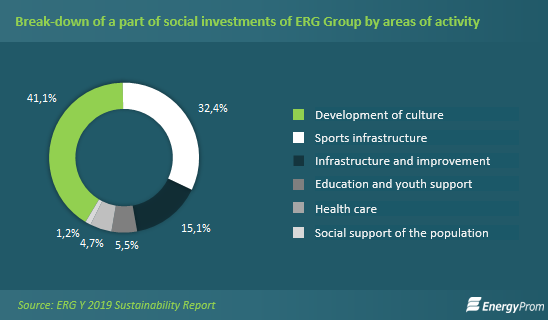 According to EGR Year 2019 Sustainable Development Report, total social investments in the countries of presence amounted to USD 118 million, with 93% of funds in Kazakhstan. In addition, funding for socially significant programs is carried out in African countries, too. Thus, since 2017, more than USD 1 million has been allocated for the implementation of the program to protect children from child labour exploitation, in particular, for the construction of Child Protection Centres in Democratic Republic of the Congo. The economic value distributed by the company, including government agencies in the countries of presence, employees, local communities, suppliers, lenders, and shareholders, in 2019 amounted to USD 4.18 billion.

The largest social projects implemented in Kazakhstan by ERG in 2019 were the construction of a football arena (USD 3.1 million) and the performance of archaeological and scientific restoration works in Kultobe ancient settlement in Turkestan (USD 2.5 million). These projects are being implemented within the framework of the adopted three-year Regional Development Program.

In addition to social development objectives, over the next 10 years, it is planned to invest about USD 350 million into technologies to reduce particulate matter emissions at the company’s power plants to meet the EU standards.

The implementation of sustainable development goals and objectives and the active involvement of Kazakhstani companies in social and environmental activities is an important stage for the development of the country on the way to entering the TOP-30 most developed countries of the world.