Safeguarding the nature: investment into environmental protection increased by 34% over the year

Environmental issues are extremely topical all over the world, including in Kazakhstan. A significant part of the population of the Republic of Kazakhstan lives in the area of direct impact by hazardous production factors, the main of which is emissions of pollutants into the air.

In 2019, emissions into the air of pollutants from fixed point sources amounted to 2.5 million tons, i. e. 1.5% more than in the previous year. In general, the increase in emissions has been observed since 2016. Of the total volume of pollutants emitted into the air, 79.6% were gaseous and liquid substances, and 20.4% were solids. Increased air pollution negatively affects human health and ecosystem stability.

In the same year, companies and individual entrepreneurs of the Republic managed to catch and neutralize 93.2% of the total amount of pollutants emitted by all fixed point sources of pollution. 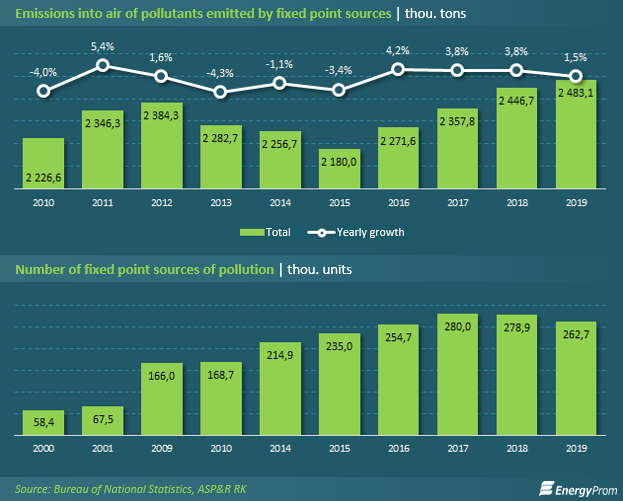 In fact, there is a gradual increase in the number of pollution sources in the country, and at the same time, emissions of pollutants into the air are growing. In the context of regions, the largest volume of pollutant emissions was formed within the territories of Pavlodar (721.5 thou. tons), Karaganda (641.3 thou. tons), Atyrau (164.5 thou. tons), Aktobe (136.6 thou. tons), and East Kazakhstan (128.8 thou. tons) Regions. This is due to the large concentration of industrial enterprises in these regions. As a result, in the above-mentioned regions, actions are being taken to protect the environment, and target indicators have been set. The plan for achieving target indicators of environmental quality includes activities carried out by large industrial enterprises that produce significant impacts on the environment.

So, for example, in Pavlodar Region, at JSC Aluminum of Kazakhstan Pavlodar Aluminum Plant, which is part of ERG (Eurasian Group), work is underway to gradually replace the existing electrostatic precipitators in the furnaces of the sintering shop, yielding a planned environmental effect of reducing dust emissions by 13%. In general, ERG group of companies is implementing an environmental strategy in Pavlodar Region, which will ultimately lead to a 57% reduction in solid emissions, despite the fact that emissions into the environment by Pavlodar Region enterprises are within the limits established by Law. In total, in 2019, investments by the group of companies into environmental activities amounted to 8.9 Billion Tenge, and in 2020-2030 funds in the amount of 134 Billion Tenge are to be allocated.

In turn, in Karaganda Region, in order to involve the public to resolving environmental problems, in 2018, the Council on Environmental Protection was established under the Regional Akim’s chairmanship. The Council is called upon to unite the efforts of the public, business, science, and government agencies in making decisions in the field of ensuring a safe environment and improving the ecological situation in the Region. The growth in waste recycling is also often driven by the activities of major industrial companies. Manufacturing enterprises are in constant search of raw materials and technologies that would reduce the cost of production. One of the urgent solutions to this issue is the use of recycled products. For example, in the already mentioned Eurasian Group, a specialized waste recycling company ERG Recycling, established in 2019, operates. The company provides for a full cycle of services related to production waste received from enterprises that are part of ERG.

In 2020, ERG Recycling Co. processed more than 350 thou. tons of waste, including man-made mineral formations. The list of recycled waste includes slags, screenings, cake, dust from gas purifiers, and more. For example: TNK Kazchrome JSC Aktobe Ferroalloy Plant produced and processed 100 thou. tons of refined slag. Of those, 7 thou. tons of low-carbon ferrochrome concentrate were received, which were sent for remelting in the enterprise’s furnaces. The project will continue in 2021. At the same industrial site, there is an opportunity to produce construction materials, for example, wall blocks. The production of construction materials (concrete and concrete products) from waste has been launched, as well as utilizing crust slag – last year, 6 thou. tons of this marketable product were skimmed and collected. 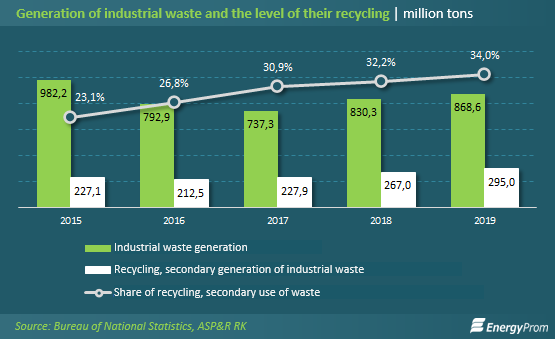 At the end of 2020, investments aimed at environmental protection in Kazakhstan amounted to 157.1 Billion Tenge – 33.8% more than a year earlier (117.4 Billion Tenge). Over the past three years, the amount of investment has been growing by an average of 75.5% per year.

One of the main points of the Code is “The Polluter Shall Pay” principle. According to this principle, companies that cause harm to the environment must either mitigate it or pay more money to the budget. Under such conditions, companies are interested in preventing negative impact on the environment, and are also stimulated to introduce the most modern available “green” technologies into their production processes.

Note: there are companies in the Republic of Kazakhstan that, even before the adoption of this Code, took actions for the technological modernization of production in order to reduce the negative impact on the environment. For example, in ERG, despite the fact that the volume of particulate matter emissions does not exceed the standards established by the state, they plan to significantly reduce the indicator, to match the standards adopted in the EU. This ambitious initiative will require approximately USD 350 million over a 10-year period. The main areas of activity include the use of advanced gas purification technologies and the conversion of the selected boiler houses to fuel gas.

In general, the action taken by large manufacturing companies, as well as the introduction of “green” technologies and tougher liability for violations of environmental legislation should have a noticeable positive effect in terms of reducing emissions of pollutants in Kazakhstan.